Vegan Cream Cheese: The Good and the Just Plain Ugly

June 26, 2011
The News From Austin
by Joanna Mayer Bolton
All About Organics
Yesterday while shopping at my local Central Market (the one on N. Lamar south of the Triangle), I got one of my rare but intense pregnancy cravings:  I saw bagels and the baby decided I needed one yesterday, and it needed to have cream cheese.  Being that I was shopping with my dear vegan husband, we wanted to get both a dairy (for me) and vegan (for him) cream cheese option.

I'm normally opposed to eating processed foods, even if it's made by a vegan friendly "health food" company or claims be "natural" or "organic."   It looks like cream cheese, it tastes like cream cheese, but it's not cream cheese.  So, what is it and how did it get that way?  It violates the basic principle espoused by one of my favorite food writers, Michael Pollan, who advises us to "eat food, not too much, mostly plants."   He says that if our grandparents or great-grandparents wouldn't have recognized it as food, it isn't food.  Makes sense, and vegan cream cheese probably falls into the "isn't food" category.

Nonetheless, vegans (like dear husband) like to eat vegan versions of non-vegan foods they used to love, and vegan versions can be healthier than the alternatives (for example, if you're going to eat a corn dog, a vegan version is probably better, although neither is really healthy).  So, I'm not entirely opposed to ever eating fake dairy or meat products (in moderation, of course), and was game for bringing home a cream cheese that the hubby could also eat.  Here are the two vegan cream cheese options that were available at our Central Market:


I've had Tofutti cream cheese several times in the past, and always liked it; it has the mouth feel of the real deal and tastes pretty good (they even make a french onion flavored cream cheese that is pretty darn good, although CM did not have this). So I picked the Tofutti up first, thinking I'd just eat vegan cream cheese along with my husband.  Hey, it's "better than [real] cream cheese," right!?  Well, then I looked at the nutritional information... 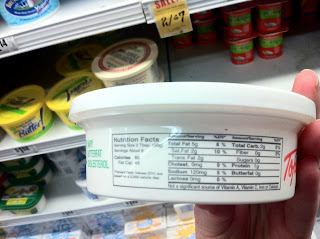 ...and discovered that the stuff has 2 grams of TRANS FATS (in the form of partially hydrogenated soybean oil) per serving!  In case you don't know what these are or how disgustingly bad they are for you, here's a bit of info from the American Heart Association:
The Mayo Clinic adds that trans fat may increase inflammation in the body, which has been linked to all types of disease, including cancer.

The AHA recommends eating less than 2 grams of trans fats per day, if any (and many others recommend avoiding it altogether).  This can be hard to control given that the FDA allows products containing less than .5 grams of trans fat per serving to be labeled as containing 0 grams.  The best way to avoid trans fat is just to avoid processed foods, which are most likely to contain small amounts of trans fat, and at very least avoid processed foods that contain enough trans fat that they are legally required to disclose it (e.g., Tofutti).

Suffice it to say, trans fats are BAD.  Finding them in Tofutti vegan cream cheese, which claims to be "better than cream cheese" and boasts that it contains no cholesterol, was very disappointing - even shocking.  A little cholesterol is in my opinion a lot better than any trans fat, and if faced with a choice, I'd rather eat regular, organic cream cheese, saturated fat and cholesterol and all, than processed crap with 2 grams of trans fats per serving.  That's a scenario in which I would say it is not healthier to be vegan (sorry, dear husband! :)).

So, what about the other vegan cream cheese option?  Here are the nutritional stats for Follow Your Heart Vegan Gourmet cream cheese: 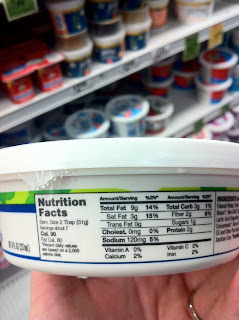 The clear winner then, if you are going to buy vegan cream cheese, is Follow Your Heart.  I would avoid Tofutti cream cheese altogether unless you can find a version without trans fat (I've heard this exists but personally have not seen it).

SO, now for the real test:  how does Follow Your Heart taste?    I tried it this morning on a cinnamon raisin bagel (made fresh at CM) and its consistency and taste is just as good at Tofutti's, and perhaps even better.  Most importantly, it did the trick - baby's bagel and cream cheese craving is satisfied!  Yay!  I'm not going to eat this stuff every day, but it's pretty good if you're in the mood for cream cheese and don't want the dairy.  Try it if you see it at your local grocery store!
Read the Full Article

Gardens Have Pulled America out of Some of Its Darkest Times. We Need Another Revival.
Vandana Shiva: Everything I Need to Know I Learned in the Forest
COVID-19 Sparks a Rebirth of the Local Farm Movement
Power up Your Immune System by Dr. Michelle Perro
European Patent Office Gives Green Light to Prohibit Patents on Plants and Animals

Find News and Action for your state: